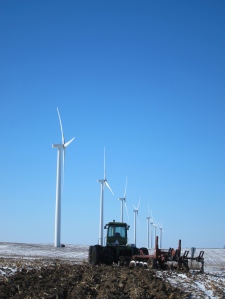 Over the past few years, the part of Iowa where I grew up has seen some big changes. As Iowa has become one of the largest generators of wind power in the United States, more and more of the state has become home to wind farms.

This weekend I could not help but be drawn to the wind farm just outside my hometown in north-central Iowa. It’s been there for a while, but is new to me since my last visit.

The towering wind turbines beckoned. I put on all my winter layers, turned my face into the stiff headwind, and pointed my feet toward the mechanical space-age giants.

It is not surprising to me that Iowa would be a good spot for wind farms– I only needed my brisk run to confirm that– but the way their presence has changed the landscape is.

From a distance the wind turbines look like contemporary jumbo-size windmills, their three fan blades circling in the breeze.

Up close, they look like they could be dormant robots awaiting activation. They’re not robots, though. At least, not as far as I could discern.

Before approaching them up close and personal I thought they would be quiet, but the turbines make an insistent mechanized whooshing sound, as  the blades circle around and around to power the wind turbine’s generator. It is not terribly loud, but enough to alter the peaceful silence of the countryside.

The wind turbines are all adorned with red lights and when returning home in the evening I could see them dotted across the fields.

I imagine many people do not even think much about the wind farms’ presence, but I found them to be quite surreal and they made me irrationally uncomfortable.

Maybe it is the the wind farms’ relative newness to the area. Maybe it’s from watching too many Transformers episodes as a kid.

It’s going to take some time for me to view these wind turbines interrupting the smooth line of the corn fields as a permanent addition the Iowa horizon.

And that’s all my Iowa news! Tomorrow it’s back to all coffeeneuring, all the time.